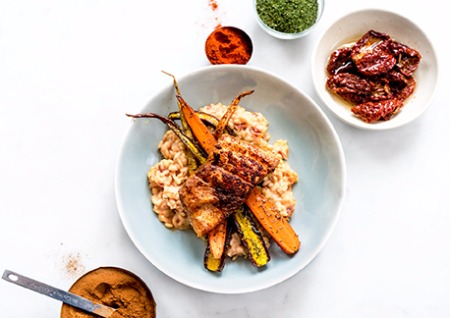 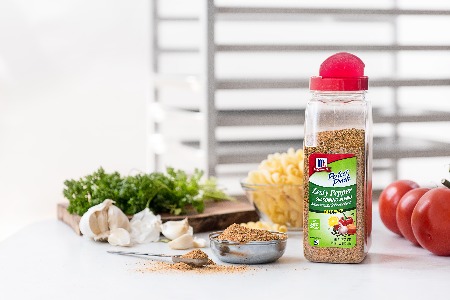 *For a yield of 24 servings multiply all ingredients by 6.

For the Carrots:
1. Slice carrots in half, toss in oil and dill, roast in oven at 350 degrees for 10 minutes.

For the Sun-Dried Tomato Risotto:
1. In a small saucepan simmer the tomatoes in the water for 1 minute then drain and chop.
2. In a saucepan melt the unsalted butter and add shallots and garlic. Sauté until translucent. Add the rice, stirring until each grain is coated with butter, and mix in the tomatoes. Add chicken stock (½ cup) and cook the mixture over moderate heat, stirring constantly, until the liquid is absorbed. Until the rice is tender, continue adding the liquid, ½ cup at a time, stirring constantly and letting each portion be absorbed before adding the next. Add cream, parmesan and salt and pepper to taste.

For Serving:
1. In a bowl place the sun-dried tomato risotto and top with heirloom carrots and cinnamon crusted salmon.